As presented in the featured video, restaurants in the U.S., as well as a major chain in the U.K., are restricting cellphone use as a means of promoting real-life social connections over the use of social media while dining out. Sadly, it’s becoming increasingly rare to see couples, families and friends interacting with each other over meals inside or outside the home.

Restaurants, which used to be a place of connection and socialization, are increasingly becoming hangouts in which patrons spend more time looking down at screens than up at and into the eyes of the people around them.

A poll commissioned by the U.K. restaurant chain Frankie & Benny’s suggests 70 percent of kids wish their parents would put down their phones and spend more time talking to them, whereas 67 percent of parents admitted their phone has come between them and their family. 1

In case you need an incentive to share meals with your partner and children, you may be interested to know that engaging in regular family mealtimes has been shown to positively influence the physical and social development of children.

From New York to Houston, US Restaurants Are Saying No to Cellphones

According to CBS News, U.S. restaurant owners are becoming increasingly intolerant of America’s love affair with portable technology. 2 The overuse of cellphones, laptops and tablets in public spaces is becoming problematic. Customers who sit together but don’t look at each other are detracting from what used to be a more interactive, social atmosphere.

Now, instead of making real-life social connections, many restaurant patrons are turning to social media . Instead of looking into the eyes of the person or people sitting across the table from them, diners are staring at their screens and checking news and social media feeds.

"You walk by a table and there's somebody playing a video game. Or people made a note they're celebrating their anniversary and you barely see them speak to each other over the course of the two-and-a-half-hour dinner," said John Winterman from restaurant Batard in New York City’s Tribeca neighborhood. 3

Rather than check out Facebook or Twitter, people should take the opportunity to focus on and enjoy each other’s company, as well as their food, asserts Winterman. His comments are based on observation only. Unlike some restaurants in the U.S. and elsewhere, Batard has not banned cellphones.

In Queens, Mario Gigliotti, owner of the Italian restaurant Il Triangolo, believes taking a break from technology helps maintain a social atmosphere in restaurants. 4 "No cellphones on the table. At dinner, everyone talks ... and this is my home ... and when you come into my home, my restaurant, that's how we run our restaurant.” 5

In Houston, some restaurants, including Churrascos in the River Oaks area, have an unstated rule that all cellphone calls must be taken outside. 6 “Half the time you’re in a restaurant and you look around and everyone is looking down. No one is looking at anyone else at the table. It just kills me,” diner Ben Melson told KHOU11 News. 7

“I try to keep my cellphone away, put it on vibrate … ” he added. 8 More often than not, restaurant staff notice tables lit up by light from blue screens. They note diners are often seen texting or posting to social media — often while seemingly ignoring their companions or letting their meals get cold.

“It’s unfortunate … to see people on a date just staring down [at their phone]. [We] can’t stop that though,” said Megan Protz, Churrascos’ general manager. 9

"It was just something we just wanted to see if we could stop for a little bit and have people enjoy each other's company more than their cellphones," she stated. 10

The promotion, called “Back in the Day Dinner,” requires patrons to stash their devices in a box on the table. “I would say 99 percent of the people [participate],” says Wright. “Some are kind of hesitant. Some really think it’s a great idea.” 11 Similarly, Sushi Lounge in Hoboken, New Jersey, offers “Reconnect Tuesday.”

“You notice everyone is sitting around and not communicating with each other. Ninety percent of the time people have their phones out,” says Maura Pidanick, a server at Lebro’s. “It’s a family restaurant, so my boss thought it was a nice idea [to put cellphones away].” 13

In its chain of 250 restaurants across the U.K., Frankie & Benny’s recently launched a trial ban on cellphone use at the table. To encourage patrons to place their devices in a “No Phone Zone” box on their table, management offered a “kids eat free” incentive for families with children up to 14 years of age.

The goal, says management, is to “get the nation to embrace and celebrate family time.” 14 The trial ban on cellphones at Frankie & Benny’s comes on the heels of a nationwide poll of 1,500 children and parents commissioned by the chain. Results of the poll suggest: 15

During the one-week campaign, Frankie & Benny's offered games and coloring kits for children and their parents to enjoy together at the table. A restaurant spokesperson told the Daily Mail, “If the initiative is a success, we'll certainly be looking at ways to activate it on a more permanent basis.” 16

About the trial ban on cellphones, author and parenting expert Sue Atkins, who is interviewed in the video above, expressed support for the ban on screens at the table. She stated: 17

“We live in a busy, fast-paced 24/7 digitally connected world, unless we consciously plan not to be … I love the idea of families sitting together, eating and chatting together away from screens.

A spokesperson for the chain noted restaurant staff would not force patrons to surrender their cellphones but, rather, they would simply encourage customers to participate in the ban.

“We looked at various ways we could encourage people to engage more at the dinner table, and we've found giving families the chance to part with their devices for a mere couple of hours is a great way to bring them closer and embrace family time,” said a Frankie & Benny’s spokesperson. 18

Eating Together as a Family Helps Kids Thrive Physically and Socially

A study published in early 2018 by researchers from the University of Montreal, Canada, suggests children who routinely eat meals together with their family during early childhood are more likely to experience long-term physical and social health benefits. 19 The research focused on a cohort of 1,492 children born between 1997 and 1998.

As part of the Quebec Longitudinal Study of Child Development, the group had been followed by researchers since they were 5 months old. About the study, Linda Pagani, Ph.D., professor in the University of Montreal’s psychoeducation department, said: 20

"We decided to look at the long-term influence of sharing meals as an early-childhood family environment experience in a sample of children born the same year, and we followed up regularly as they grew up.

Using a birth cohort, this study examines the prospective associations between the environmental quality of the family meal experience at age 6 and child well-being at age 10."

According to the results, a favorable family meal environment at age 6 predicted the following outcomes for the children at age 10:

With respect to those outcomes, Pagani commented: 21

"The presence of parents during mealtimes likely provides young children with firsthand social interaction, discussions of social issues and day-to-day concerns, and vicarious learning of prosocial interactions in a familiar and emotionally secure setting.

Experiencing positive forms of communication may likely help the child engage in better communication skills with people outside the family unit.”

About the positive impact of family meals, authors of a 2011 study published in the journal Pediatrics found children and adolescents who share family meals three or more times per week are: 22

How to Safeguard Your Health in the Face of Cellphone Overuse

It’s no secret the popularity of cellphones continues to rise, making it the most rapidly accepted consumer technology in recent history. 23

While there is real value and convenience associated with devices that enable you to communicate anytime, anywhere, the constant use of cellphones may be endangering your health. About Americans’ tendency to become hooked on their cellphones, The New York Times observes: 24

"The near-universal access to digital technology, starting at ever younger ages, is transforming modern society in ways that can have negative effects on physical and mental health, neurological development and personal relationships, not to mention safety on our roads and sidewalks."

Easy access to technology has led people to take their cellphones everywhere without a second thought, including the kitchen, doctor's office, dinner table and even the bathroom. Most notably, the constant use of cellphones increases your potential health risks associated with electromagnetic field (EMF) radiation.

To learn more about the negative effects of EMFs, I recommend you read “ The Harmful Effects of Electromagnetic Fields Explained .” For now, I would like to share a few suggestions on how you can keep yourself safe when using your cellphone:

• Exercise caution when carrying and using your cellphone — Due to the reality your cellphone is always emitting a signal when it is on, I recommend you avoid carrying it in your pants pocket or bra.

Also, to ensure more restful sleep, keep your cellphone and other electronic devices out of your bedroom while you are sleeping.

• Keep your phone clean — Wiping down your phone on a regular basis using a solution of 60 percent water and 40 percent rubbing alcohol sprayed on a soft cloth is one tactic you can use to eliminate surface germs on your cellphone . 25

Given the ease with which health-damaging bacteria can transfer to your phone, I also advise you do not take your phone into the bathroom. 26

• Limit cellphone use to areas with excellent reception — When reception is weak, your device has to emit more power, and therefore more cellphone radiation . As such, I suggest you use your cellphone only when you have a strong signal. If the signal is weak, postpone the conversation or keep it brief.

• Maintain your cellphone away from your head — Ideally, I advise you to use your cellphone only for texting and short phone calls. If you do not have access to a landline for longer phone calls, I recommend you use the speakerphone or a headset that uses a combination of shielded wire and air-tubes.

When not in use, I recommend you switch your cellphone to airplane mode or maintain it at least 3 feet away from you.

While restaurant bans on cellphone use are certainly one potential way to foster more connection among family and friends in a technological age, I would like to underscore the importance of exercising self-control and common sense when using personal electronics.

If your intention is to spend time over a meal with people you care about, I encourage you to put away your devices and focus on the food and fellowship. Without digital distractions, you will be free to look into the eyes and hear from the hearts of those seated around the table.

You’ll also appreciate the atmosphere and food to a greater measure when you are looking out onto the scene around you instead of down at a screen. I can say without hesitation, the sense of connection you’ll experience relating to other human beings far exceeds anything you’ll see on a screen. 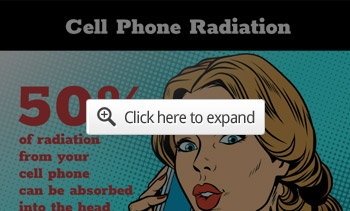 Longevity Depends on Your Lifestyle