Bacteria live on your skin and nearly every other unsterilized surface. However, not every bacterium is dangerous or harmful to your health. In fact, data have demonstrated the more children are exposed to bacteria the lower their risk of developing allergies. 1 , 2

Your skin is the largest organ in your body and colonized by a diverse number of microorganisms, many of which are harmless or even beneficial. Your skin acts as a physical barrier to prevent the invasion of foreign pathogens and at the same time provides a home to your microbiome.

Despite environmental variations, the skin microbiota of a healthy adult often remains stable over time. These microorganisms play an important role in the effectiveness of your cutaneous immune system. Researchers have found reversion of an altered microbial state may help prevent or treat disease. 3

A break in the skin can lead to local or systemic infection when bacteria are allowed to invade. Data have demonstrated simple household items, such as a smartphone 4 or kitchen sponge, 5 may harbor a significant number of harmful bacteria.

Groceries are another way you may bring bacteria into your home. Meat is a suitable growth medium for a host of microorganisms 6 and produce has been recalled after multistate outbreaks from E. coli contamination. Recently, the U.S. Food and Drug Administration (FDA) warned that avocado skins carry Listeria and Salmonella. 7

FDA Finds Listeria and Salmonella on Some Avocado Skins

Starting in 2014, the FDA began microbial surveillance, sampling of whole fresh avocados as part of their preventive approach with “the ultimate goal of keeping contaminated food from reaching consumers.” 8 In an 18-month sampling period, the agency collected just over 1,600 avocados to determine the prevalence of Salmonella and Listeria monocytogenes.

Salmonella was detected on only 12 skin samples from domestically grown products; none from the imported avocados had the bacteria. The FDA took these findings to confirm Salmonella could potentially be present on avocado skin. On the FDA website, they recommend consumers take steps to reduce the possibility of microbial exposure via avocados. Foodsafety.gov 10 recommends: 11

“[W]ashing all produce thoroughly under running water before eating, cutting or cooking. Even if you plan to cut the rind or peel off the produce before eating, it is still important to wash it first so dirt and bacteria aren't transferred from the knife into the fruit.”

Salmonella can lead to diarrhea , fever and abdominal cramps, which can become so severe they lead to hospitalization. Symptoms of Listeria infection depend on the individual but include fever, diarrhea and muscle aches. Symptoms can show up a few days after eating the contaminated food but it may take as long as 30 days before the first signs of infection begin.

Listeria may spread to the nervous system and trigger headache, stiff neck, confusion, convulsions and loss of balance. Those at greatest risk are pregnant women who may suffer a mild Illness but could experience miscarriage, stillbirth or premature birth, and those with a weakened immune system. 12

The FDA Unclear About What Should and Shouldn’t Be Washed

One of the U.S. Department of Agriculture's (USDA) food safety educators says people are still shocked when told not to wash poultry, even though it has been known for at least a decade that washing ends up dispersing food pathogens around the kitchen and increases the risk of foodborne illnesses . 14

According to associate professor Benjamin Chapman, Ph.D., who heads up the North Carolina State University's agricultural and human sciences department, washing chicken does not remove bacteria; rather it spreads the germs to hands, work surfaces, clothing and even nearby utensils and food. 15 “The washing process can really only increase risk.”

In a collaborative effort between North Carolina State University and the USDA, preliminary results from a multiyear study demonstrate participants spread bacteria from raw meat across the kitchen to spice containers, refrigerator handles and even salads without realizing it. 16

Recommendations from the FDA are confusing though. According to the agency, consumers should rinse their fresh fruit and vegetables with cold water, even though cold water doesn’t reduce the number of pathogens or kill bacteria, 17 but not raw poultry, meat or eggs as this disperses foodborne pathogens. 18

The International Association for Food Protection also states that produce clearly labeled as having already been washed should not be washed again as it doesn’t reduce pathogens, but increases the risk of spreading bacteria around the kitchen. 19 According to Chapman: 20

“Pathogens are just so small and the surface of produce is so creviced, that the pathogens do a really good job attaching and hiding where water can’t even get to. There are a lot of myths out there that if I wash, I can wash the pathogens off. You can wash a little bit off, but not enough to significantly reduce your risk.”

Keep Soap and Detergents Away From Your Produce

The FDA also recommends keeping soaps and detergents away from your produce as they leave a residue on the product and likely also affect the taste. According to Kaiser Health News: 21

“There are no FDA-approved food cleaners on the market, and the agency hasn’t found anything to be more effective at removing bacteria than cold running water.”

However, it’s important to remember bacteria are particularly adept at adhering to surfaces, including your skin, produce, meat and kitchen surfaces. In order to remove all bacteria from your produce, your skin and counter surfaces must first be sterilized. Once you handle the produce, bacteria from the skin of an avocado, or leaf of lettuce may then adhere to your skin.

While many think of a pack of ground beef as being the meat from an individual cow, it's actually an amalgam of meat from many different cows — a single fast food hamburger can contain meat from more than 1,000 animals,6 and all you need is one sick animal to contaminate nearly unlimited amounts of meat as it all runs through the same processing equipment and gets mixed together in gigantic batches.

Pesticide Exposure Is Not Harmless

It may seem innocuous to add a few squirts of dish soap to your produce with the intention of removing bacterial pathogens, but of the 232 hand-washing soaps listed on the Environmental Working Group's (EWG) Healthy Cleaning database, 22 58 scored an F. Those receiving the lowest score contained specific toxic ingredients detailed by Treehugger, including: 23

Washing produce helps reduce your exposure to the vast amounts of pesticides and insecticides used in agriculture today. The very same companies that developed chemical warfare weapons during World War II transitioned into agriculture after the war, using some of the same chemicals on food.

Nearly 80 percent of the genetically engineered crops are designed to withstand herbicide application, most often a glyphosate-based product. As a result, foods contain far greater quantities of pesticides than ever before.

The Endocrine Society Task Force warns the health effects of hormone-disrupting chemicals is so great everyone needs to take proactive steps to avoid them, especially those seeking to get pregnant, pregnant women and young children. 24 Even at extremely low levels, pesticide exposure increases the risk of certain diseases, such as Parkinson's disease. 25

It is safer to separate and clean produce and meat to help prevent cross-contamination. Raw meat and poultry should also be kept separate in your grocery bag, in your refrigerator and during food preparation.

Food safety experts recommend washing utensils and anything else used in food preparation in hot, soapy water to remove food pathogens. Washing your hands properly before and after handling food can help prevent contamination of other kitchen items.

Just like the Stanford study, this follow-up analysis, 10 published in 2014, found that while conventional and organic vegetables oftentimes contain similar levels of many nutrients, the frequency of occurrence of pesticide residues was four times higher in conventional foods.

While washing meat doesn’t remove pathogens, cooking it does. Therefore, cooking your pastured, organic meat to the correct temperature helps reduce your risk of foodborne illness. Washing produce presents a different challenge as many times your fruits and vegetables are eaten raw.

Effectively and Efficiently Clean Your Produce

A research team from the University of Massachusetts 27 undertook a study to compare three methods of reducing toxins on produce. The team used apples to examine the effectiveness of commercial and homemade washing agents to remove pesticide residue.

Dr. Philip Landrigan, researcher at the Arnhold Institute for Global Health from the school of medicine at Mount Sinai, advises people to eat organic as often as possible, but to at least wash your fruits and vegetables. 28

Organic foods have a 30 percent lower risk of pesticide contamination, 29 but it's not entirely possible to guarantee organic produce is pesticide-free, as it is sometimes located in adjacent fields to farms where pesticides are used.

The research team believe the alkalinity of baking soda likely degrades pesticides faster, making it easier to physically remove the chemicals through washing. The researchers recommended a concentration of 1 teaspoon of baking soda for every 2 cups of water and gentle scrubbing. 30

You may also reduce your exposure to foodborne pathogens from produce by using white vinegar, as the acidic vinegar crosses bacterial cell membranes and kills the cells. 31 Before misting thoroughly with a blend of vinegar and water in a 1 to 3 ratio, ensure you’ve removed the baking soda, as it will neutralize the vinegar. Let the produce rest for 30 minutes and then wash lightly under cold running water. 32

Through the practice of safe food handling, separating meat and produce, and washing your produce to reduce your exposure to pesticides, you may reduce your risk for exposure to foodborne pathogen illnesses and risks of exposure to endocrine disrupting chemicals and known carcinogens. 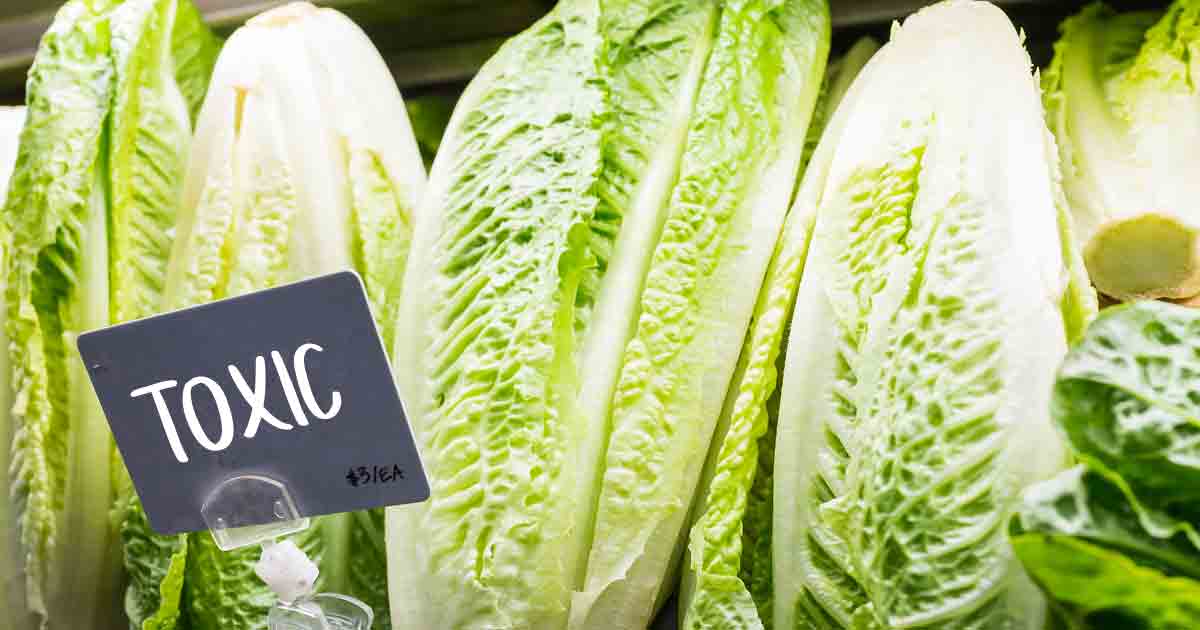 Why Is so Much Romaine Lettuce Toxic?